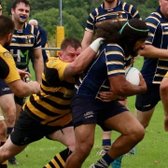 Catch Up With The Captains

With the opening game of the season just weeks away and pre-season training well underway, what better time to catch up with Second team captain Oliver Gray, to reflect on last season and look ahead to the 22/23 campaign.

Oliver, how was last season for the seconds?

Last season was one of ups and downs really. When the lads got chance we played some brilliant rugby and put in some solid performances. Unfortunately later on in the season, due to a lot of teams being unable to put out a second team we were left with a few empty fixtures. Now that the Cumbria Shield Committee have come together and restructured the league with new rules I believe that every fixture will be fulfilled. Overall it was an excellent effort by everyone. I was very proud of the lads last season and we can't wait to get stuck in again next month.

How has pre-season training been going?

Pre-season has been great so far. On Monday nights we have strength and conditioning sessions up at Lake District Barbell and on Wednesdays we're back at the club training with new coach Ross. His sessions have been great with solid numbers attending and its fantastic knowing we'll have two teams this year.

Any lessons from last season to take forward into the 22/23 season?

Not so much a lesson but keeping in constant communication with the lads so that we have a consistent team is going to be a must this season.

Aims for this season?

The aim for the season is always the same for me....win, win, win! But at the same time its all about making sure that the lads are enjoying it and that we are always growing and progressing as a team. I strongly believe the lads in this team have the potential to go on and win the league this season.

Who are the main teams to look out for in the league?

The teams we always look forward to playing are Aspatria and Keswick. They always seem to be good, physical contests and bring out the best version of the lads. That being said, we aren't looking past any of the teams in the league.